EAGE was founded in 1951 when much of the formality of an earlier era still persisted. But, from the beginning, the Association managed to stay true to its motto ‘Quaere et Invenies’, Seek and ye shall find. EAGE and its successors reached out first to geophysicists, but then as the nature of the petroleum industry changed, it broadened its platform. There were watersheds in 1989 and again in 1995 over the EAEG, EAPG and establishment of the EAGE we know today.

The evolution of EAGE, its growth and structure, almost perfectly reflects the emergence of the geosciences and petroleum engineering industry with its related academic and research institutions. This is true also for our mining and civil engineering membership and activity.

The years between the first ‘organised’ EAGE meeting in Scheveningen (The Netherlands) in 1951 and the present have demonstrated to be a phenomenal progress in a science and practice which is often in fact almost always, very complex and challenging. Huge obstacles, theoretical and operational, have been overcome to the immense benefit to the petroleum industry and by extension to the society as a whole. 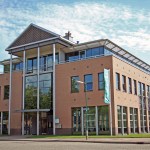